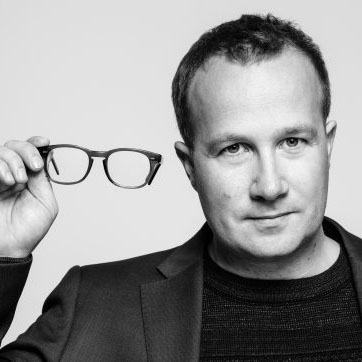 Andri Snær Magnason is an Icelandic writer, born in Reykjavik on the 14th of July 1973. His book, On Time and Water was a national best seller in Iceland in 2019 and will be translated to more than 24 languages, coming out in the UK August 2020. His most recent book in english, The Casket of Time, won the Icelandic literary Award and was nominated for the Nordic Council Children’s book Award and has been sold to 14 countries. Andri has written novels, poetry, plays, short stories, essays and CD’s. He is the codirector of the documentary film Dreamland.

Andri’s work has been published or performed in more than 35 countries. His novel, LoveStar got the Philip K Dick Special Citation 2013, and the Grand Prix de l’Imaginaire in France for best translated Science Fiction of 2016. LoveStar was chosen “Novel of the year” by Icelandic booksellers and received the DV Literary Award. His children’s book, The Story of the Blue Planet, was the first children’s book to receive the Icelandic Literary Prize and has been published or performed in 30 countries. The Story of the Blue Planet received the Janusz Korczak Honorary Award 2000 the West Nordic Children’s Book Prize 2002, The Green Earth Honor Award 2013 and the UKLA Award in 2014.

The Blue Planet has been performed in theatres in Greece, Finland, Denmark, Swiss, Iceland and Canada. Andri has collaborated with various artists in the fields of activism, architecture and theatre – mostly with a band called múm. Andri has been active in the fight against the destruction of the Icelandic Highlands. His book – Dreamland – a Self Help Manual for a Frightened Nation takes on these issues. Dreamland has been published in English, Danish, German, Spanish and Japanese and has become a feature length documentary film. Footage from Dreamland and an interview with Andri can be seen in Charles Ferguson’s Oscar winning documentary – Inside Job. Andri can be contacted here: andrimagnason@gmail.com. Andri Magnason is the winner of the Kairos Award of 2010 – granted by the Alfred Toepfer institute in Hamburg.

Andri comes from a family of doctors and nurses. His father is a doctor, his mother is a nurse, his sister is a brain surgeon, his brother is in computers but his wife is a nurse. Andri is married to a nurse but her sister is a doctor, his mother-in-law is a nurse and her sister too. His great grandfather was a doctor in the West Fjords of Iceland. His grandfather, Björn Thorbjarnarson was chief surgeon at the New York Hospital and a professor at Cornell University. Björn wrote the bestseller: Surgery of the Bilinary Tract, 1975. Andri lives in Reykjavík, he has four children.

On Time and Water
Kolapse
2020
RIFF in partnership with Kabinett, Iceland Naturally and the National Nordic Museum in Seattle presents the world-premiere...