RIFF joins KABINETT on KOLAPSE, a Global Conversation to Rethink the World

From November 19th to February 21st, a group of artists, musicians, writers, film-makers, activists and leaders from around the world will join KABINETT to present works of art, music, cinema and participate in talks about the future of our planet and the challenges humanity is facing in the coming decades. KOLAPSE is an encounter to elevate our consciousness, watch films,  listen to music and take action to battle our urgent climate and social crisis.

KOLAPSE was originated by Edo Costantini, founder of KABINETT, in Buenos Aires, Argentina, in November 2019, when, Costantini organized an encounter between Patti Smith, Alberto Fernadez (President-elect), Juan Cabandie (Minister of Environment), and Jesse Paris Smith & Rebecca Foon (founders of Pathway to Paris), to discuss the importance of our climate emergency and how Argentina could lead the way in Latin America. That same week, KABINETT organized a talk by Bernardo Kliksberg at MALBA museum on our global climate and social emergency. The result was the launch of KOLAPSE – a much needed global conversation to nurture our planet back from the brink of destruction.

Their film program kicks off with the Latin American premiere of LAST AND FIRST MEN by Jóhann Jóhannson, in partnership with the Reykjavik International Film Festival. Stay tuned for an insightful program at KOLAPSE. Follow their screening platform KABINETT to discover groundbreaking content that helps us understand our current climate and social struggles.

Poetic, tragic and hopeful, Last and First Men represents Jóhann Jóhannson’s final and most personal work – an allegory of remembrance, ideals and the death of utopia.

We’re proud to present this gem of Icelandic cinema as the opening film of KOLAPSE, STREAMING NOW AT KABINETT in all LATAM territories.

An interview with cinematographer Sturla Brandth Grøvlen will be available on their platform on November 30th.

Several billion tones of earth are moved annually by humans – with shovels, excavators, or dynamite. Nikolaus Geyrhalter observes people, in mines, quarries and at large construction sites, engaged in a constant struggle to take possession of the planet.
STREAMING NOW AT KABINETT in all LATAM territories.

ON TIME AND WATER

Scientists have predicted a fundamental change of all water on our planet. The glaciers are melting and becoming ocean, which rises and becomes more acidic, changing its pH in the next 100 years equivalently as how it did in the previous 50 million years. How can we understand that scale and the timeline, and why did we not understand it already in the 1990s?

Andri Snær Magnason, accompanied by the music of Högni Egilsson, takes us on a journey into time. Mythology, grandmothers, glacier travels, language. In an attempt to understand the biggest issues of our times.
STREAMING NOW AT KABINETT worldwide. 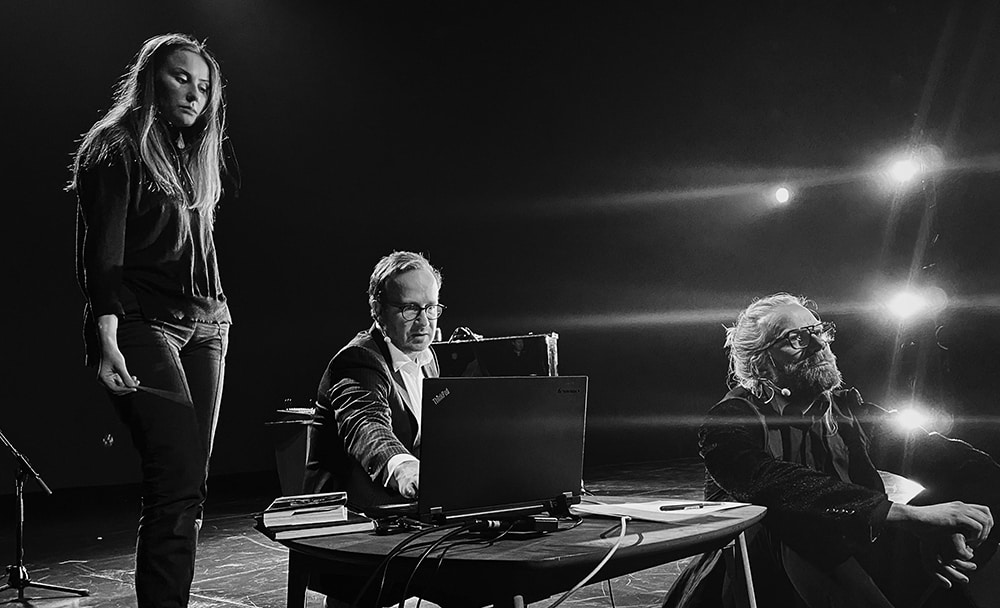 Last and First Men by Jóhann Jóhannsson, Little Joe by Jessica Hausner, The Salt of the Earth by Wim Wenders and Juliano Salgado, Ghost Cell by Antoine Delacharlery, Peripheria David Coquard-Dassault, Earth by Nikolaus Geyrhalter, Obras by Hendrick Dusollier, Corona Shoo Shoo by Krsitina Nikolova, Yin by Nicolas Fong, Supervenus by Frédéric Doazan, Japón-Logo Impact Hub Kyoto, Order of Importance by Carlos Fueyo Playar Studios, The Death and the Others by Renée Nader Messora and João Salaviza, The Girl from the South by José Luis García, Rey by Niles Atallah, News from the End of the World by KABINETT & EL PAMPERO, On Time and Water by Andri Snær Magnason, Daphne Naturaleza by Edo Costantini, Pathway to Paris in Argentina with Patti Smith by El Pampero.